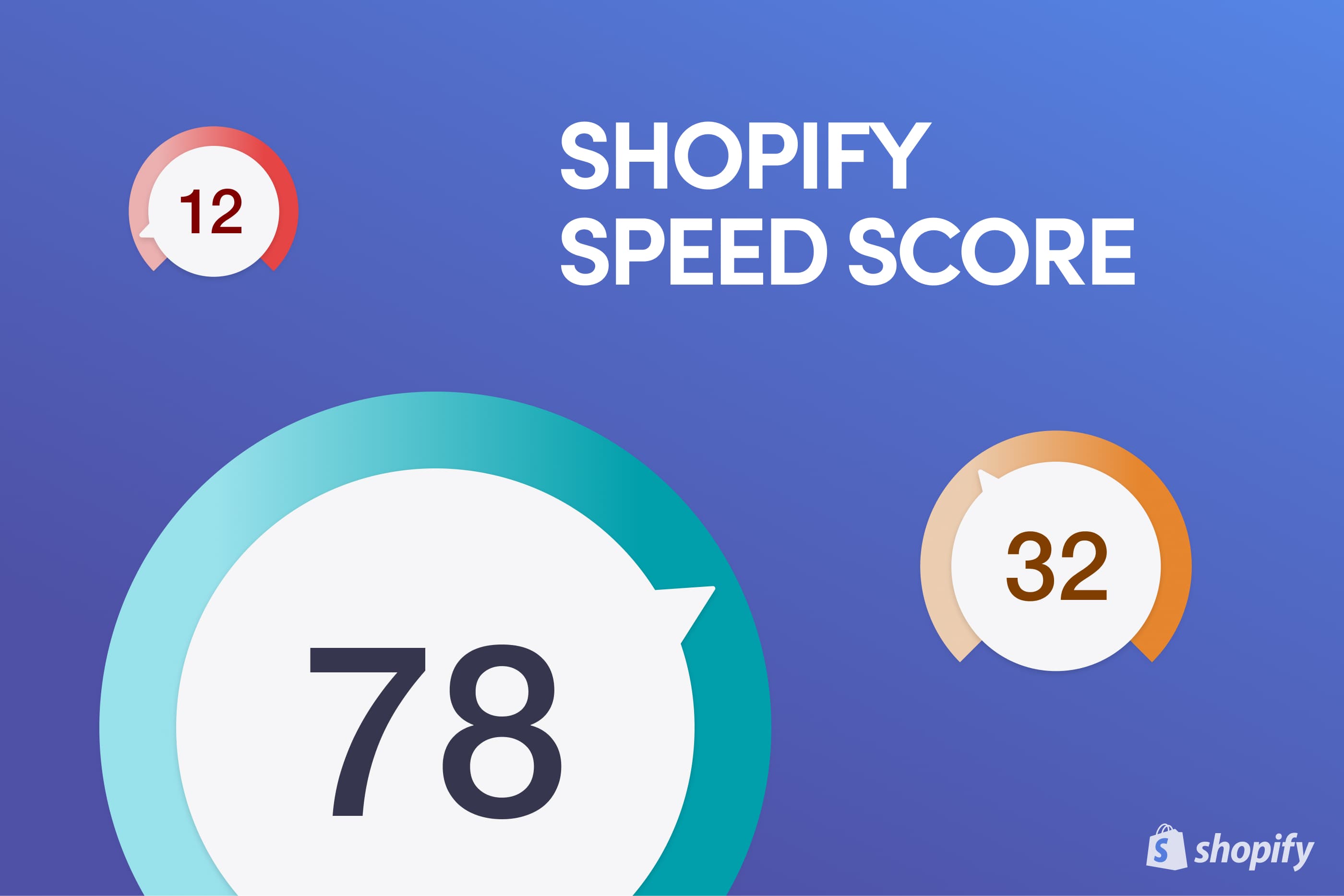 How Important Is a Good Shopify Speed Score? Here's What You Should Know.

In July 2020, you might have noticed a new feature appear on your Shopify dashboard on the themes page. It’s labeled “Online store speed” and shows a number from 0 to 100.

For many stores, large and small, that number would be very low. Often in the 20’s or even in the single digits. This is often surprising, because when you use your store normally it really doesn’t feel that slow. You had no idea it was this bad!

It’s also quite upsetting when you have set up a brand new store, invested your money into buying a premium theme, only to see a very low score and feel like something is wrong. After all, when you buy something new, you expect it to work!

Don’t worry though, because things aren’t all that bad. You should indeed take the speed score into account, but with a grain of salt.

I’m going to explain how the speed score works, what you should pay attention to and what you can ignore, and finally I will explain some easy ways to quickly improve your speed score.

The Shopify speed score and the reports are not something that Shopify has built themselves.

The data and testing it actually done by a popular tool from Google, called Lighthouse (or ‘Pagespeed Insights’). It’s a free tool and most web designers and SEO experts will use it as an indicator of the speed and SEO-friendliness of a website.

It is a good tool to use when building a normal, non-eCommerce website. But keep in mind that it’s just a robot — it generates reports based on very generic factors. There are three things to take into account:

1. Lighthouse ranks your eCommerce site by the same scale as a small brochure website.

Lighthouse measures the speed of many different types of websites across the internet and compares them based on specific ‘best practices’. It doesn’t know what platform or technology you are using, it doesn’t know what the purpose of your website is.

Imagine comparing a compact car with a truck or lorry.  One is for short trips around the city and the other pulls several tonnes. You wouldn’t expect them to be able to compete in weight or fuel efficiency.

Shopify is the truck in this scenario. It does so much more than an average website. It usually has hundreds of products, meaning it has to load a lot more dynamic information on every page. It has marketing tools connected to it, it has apps and scripts. It has currency converters, wishlists, customer accounts, and much more…

A website that would rank 100 on Google Lighthouse has none of that. It probably just shows some information with images and text, and has a contact form at the bottom. Almost no interaction with the website is needed, and so it can be very lightweight.

If it had an option to compare only with other eCommerce stores, we would be seeing much higher numbers. Shopify do write whether it’s faster or slower than similar stores, so that kind of helps understand the real situation.

2. It’s a score based on best-practices, not an actual performance indicator.

There are tools that measure your actual loading speed, such as:

Google Lighthouse and the Shopify speed score, do not measure your actual loading speed. Instead, they give you a score based on various factors, with your loading speed being only one of those factors.

The other factors that the speed score measure are whether your site follows ‘best practices’.

What are best practices? It’s basically what the web development industry has agreed to be the ‘right way’ to build websites. And generally they are a good set of rules to follow. However, that doesn’t always work when you are using a unique technology like Shopify.

Shopify does things a bit differently from Wordpress for example (and more than 50% of the web is using Wordpress). So many of the suggestions that Google Lighthouse will offer simply aren’t posssible to implement on a Shopify website.

Shopify also has a unique business model. With a regular website you need to purchase hosting on a server. You then have access to various functions of that server and the files that are on it. Shopify doesn’t have that since it provides the software and the hosting as a package.

This means that certain suggestions from Google Lighthouse are not possible to implement. For example, you might see something about server response time or cache policy but you can’t do anything about that on Shopify. So you will never be able to tick those boxes on the Google Lighthouse ranking system.

Actually, Shopify even does some of those things, but they aren’t visible to Google Lighthouse so it thinks it isn’t happening.

Because of the above reasons, it’s literally impossible to actually do all the things that google recommends you do to get a perfect score. So don’t waste your time and money trying to optimize things to acheive that number.

That being said, it is good that Shopify compare to ‘similar stores’. These are stores with a similar number of products, sales, traffic, and other stats.

This means ignore the number, but pay attention to what they write in the note right next to it. It will either say “the same speed as similar stores on Shopify” or slower or faster. So you could have a number of 30 but it will say that this speed is average for similar stores. If this is the case, there is no need to worry.

Was this a good idea from Shopify?

I understand that Shopify wanted to emphasize to store owners that speed is important, both for the user experience and also SEO. It’s true that many store owners are screwing up their stores with lots of apps, uncompressed images, and marketing tools with no regard for the speed of their store.

But my problem with it is that they just used Google Lighthouse for it, rather than building their own measuring tool. As a result, the numbers just look really disappointing.

In fact, here is a list of (almost) all the Shopify themes tested in Google Lighthouse. These are brand new themes, which were tested with their demo store content. As you can see, many of the most popular themes like Palo Alto, Pacific, Startup… all have quite low scores on mobile. With the high scoring themes being very minimalist ones.

I’m sure Shopify developers are aware of the shortcomings of using Google Lighthouse for their speed score. The best solution would obviously be if they developed their own speed ranking system but I’m guessing that is pretty difficult to do.

So should you be worried about your Speed Score?

The speed score doesn’t tell the full story. Rather than the score you should focus on the note next to it, which tells you if your store is faster or slower than other similar stores.

You can also test your store in actual loading speed testing tools like gtmetrix.com and tools.pingdom.com. If the results aren’t terrible, then I wouldn’t worry too much about it.

That being said, it is very important to take care of the basic best practices for speed optimization.

if you’ve heard of the 80/20 ‘pareto’ principle —  where you can get 80% of the results for 20% of the effort — it definitely applies here. And there are some quick wins to be made without even needing to hire a developer or do anything complicated.

Images are going to be the heaviest thing on your page, so it’s important they are as small as possible and also don’t load when not needed.

Try to see if people are actually using the apps you have installed. Many apps will have reports showing you how many people clicked or did something.

Some parts of design actually make you more money. Whereas some are just decoration. Try using a heatmap tool to see if customers actually watch those videos or slideshows.

The rich text element allows you to create and format headings, paragraphs, blockquotes, images, and video all in one place instead of having to add and format them individually. Just double-click and easily create content.

How to customize formatting for each rich text

How to customize formatting for each rich text

Headings, paragraphs, blockquotes, figures, images, and figure captions can all be styled after a class is added to the rich text element using the "When inside of" nested selector system.dvdjvijef

“Headings, paragraphs, blockquotes, figures, images, and figure captions can all be styled.”
- Kyls

Each month we publish actionable tips & tricks to improve your Shopify store. Sign up to get notified.

Thank you! Please check your email for confirmation.
Oops! Something went wrong while submitting the form.